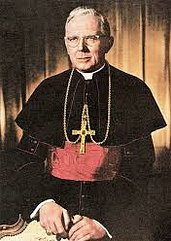 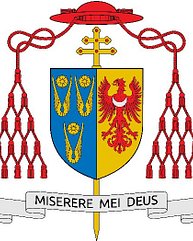 He was ordained a priest of New York on May 21, 1921 in St. Patrick’s Cathedral.  In 1939, he formed the Columbiettes, a Knights of Columbus women’s auxiliary. Appointed Auxiliary Bishop of New York on November 16, 1940. Installed as Archbishop of Los Angeles on February 7, 1948 and retired on January 21, 1970. He was made a cardinal by Pope Pius XII in 1953. Cardinal McIntyre opened 180 Catholic schools. In 1952, he delivered the sermon at the opening of the 70th annual Knights of Columbus Supreme Convention held in Los Angeles. He also dedicated 192 churches, including 25 in the San Fernando Valley and 27 in Orange County, which did not become a separate diocese until 1976. He was known as an ultra-conservative, anti-communist despite being a democrat. He lived to the age of 93.